When current flows in a conductor, heat energy is given out at every point in that conductor. This energy comes from the battery (or other source, e.g. a generator) that is driving the current through the conductor.

In a battery, chemical energy is converted into electrical energy. The electric charges get electric potential and kinetic energy as they pass through the battery.

The average kinetic energy of the moving charges remains the same. The lost potential energy is converted into heat as the charges move round the circuit.

As they move around the circuit their average speed and average kinetic energy ( ½*m*v² ) remain constant, but they lose electric potential energy. This lost potential energy appears as heat and light . FIG. above shows this in a simplified way.

POTENTIAL DIFFERENCE BETWEEN TWO POINTS IN A CIRCUIT

What does it mean?

VOLTAGE  IN SERIES AND PARALLEL CIRCUITS 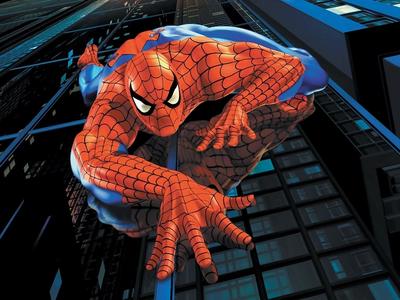 difference across each part.

VOLTAGES IN PARALLEL The potential difference across each of a number of conductors connected in parallel with each other is the same.

In the case, if the voltage of the battery is 10 Volts, every Bulb support 10 volts between its terminals.

Let see a video about series circuits and parallel circuits  in a car.

1º In the next exercises, batteries have equal values of 5 volts. Which circuit has the brighter globe, a or b? Why? What happens in c and d?

2º In the next circuits, the battery has a value of 6 volts. Calculate how may volts each lamp receives. 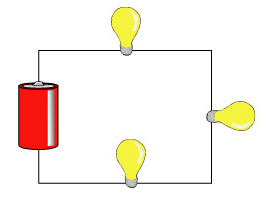