1º How can you turn the water back to ice?. Does ice take up a bigger or smaller volume than water?.

3º What is a Biodegradable material?

6º Fill the gap. A _______ is a waterproof material very strong that doesn’t allow light past through it and is not flexible.

7º Can you name a rock that floats on the water

8 Why is electrical wiring usually covered with a layer of plastic? 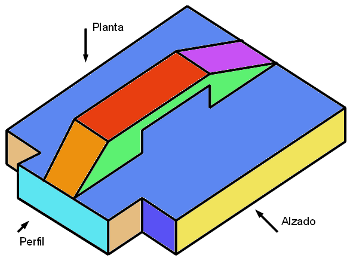 9º Draw the Top view, Side view and Front view of the next figure

10. What is a plywood. How is it made and properties

11º What is an artificial material. Examples

13º Properties of Iron and wool.

14ºWhat would be a good rock to tile a roof with and why?

18º Classification of metals according to their density. Examples

19º What percentage of carbon is in steel. Properties and example of applications

20º Siderurgic processes. Fill up the gaps using these words:

24º Tin. It is a metal or a alloy?. Feature and applications.

b) Hot air is introduced ……

b1) With the ore and the gangue

b2) into the high part

b3) To obtain the  no ferrous minerals

c) The element which burns with air is

d) In the blast furnace the iron is separated from the oxygen, transforming the _______ into pure iron

27)  ____ is very resistant to corrosion and this property makes it suitable for coating other metals, such as cans.

29 )  Complete the paragraph by choosing words from the list given. You can choose the same word several times.

The first metal to be used was ____. Some rocks with _____ minerals were probably next to a fire. The fire made the _____ melt and drip from mineral, forming a pool on the ground.
Later came ____. This probably was also found accidentally. Minerals containing _____ also often contain ___, so as both metals dripped from the minerals they mixed.
And finally _____. When we melt ______ using a wood fire, a bit of _____ mixes with the molten ____ and the result is _____.
In ancient times, miners found metals only in small amounts (especially silver and gold) so they were very valuable.

Drip: The formation and falling of drops of liquid. Example of expression  ->

“there’s a drip through the roof”