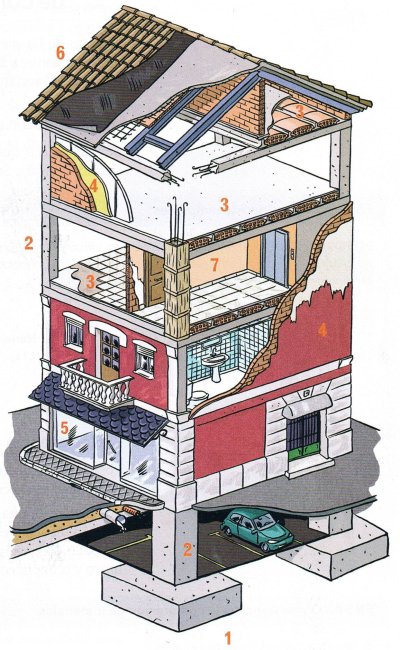 The illustration shown on the right represents the essential  elements of a modern Building.

Each of every part in the building has its own functions and a good  design is crucial.

Most people would agree that walking in sand is harder than walking on a concrete footpath. This is because your feet tend to sink into the sand when you try to move forward. A similar thing happens when a house is built — it sinks into the ground. Of course, the extent to which a house sinks into the soil is so small that it isn’t noticeable. This is because investigations are carried out to ensure that the ground is strong enough to support the weight of the building before construction begins. This is done by checking what type of soil is below ground level. Some soils are good at supporting loads, others are not. By establishing the soil type and comparing it to known performance figures, the designer can be confident that the building will not sink when complete.

A foundation is the part of a structure that transfers the loads from the structure to the ground. It is essential that the loads are spread safely and evenly over the supporting ground to ensure the stability of the building. In most cases we do not see the foundation of a building because it is below ground level.

As well as supporting the weight of the building, the foundation provides a level bed on which to build. While we usually think in terms of the building´s weight keeping it in place, in some cases, especially for taller buildings, the foundation actually anchors the building to the ground. A properly designed foundation will limit settlement, ¡.e. the tendency for a new building to sink into the ground. It is normal for a building to experience some settlement. This is because most soils are a mixture of the soil, air and water. When the building load is exerted on the soil, the air and water are driven out and the soil consolidates. In non-cohesive soils this happens during the construction phase, although in cohesive soils (e.g. clay) it can occur over a period of years. .

Foundations differential settlement will occur if an area of softer soil is undetected. ( See image above on the left ). Above on the right, a properly designed foundation will safely and evenly transmit the load over the supporting ground to ensure the stability of the building. Now, there is not cracking in the house frontage.

The function of a foundation can be summarised as follow: 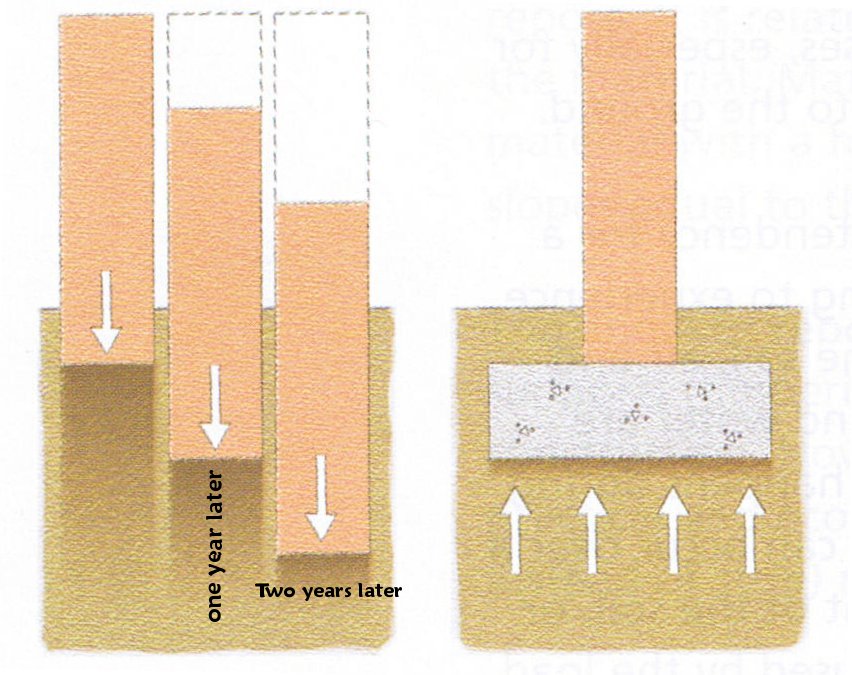 A foundation is always wider than the element (e.g. wall or column) which it is supporting. This is so that the load ¡s spread over a greater area. The bearing pressure exerted on the soil by a structure is the force per unit of area. For example,  if it the bearing pressure is 100 kN/m2 this could be 10 kN exerted on 10 m2 or 5 kN exerted on 20 m2. Therefore, as the area increases the force exerted decreases. By increasing the area of a foundation under a house, the force exerted per square metre on the soil is decreased. For this reason, a traditional strip foundation (commonly used for house construction) is always three times wider than the overall width of the wall. In this illustration a structure without foundations will sink. A tree times wider foundation will support all load without movement. 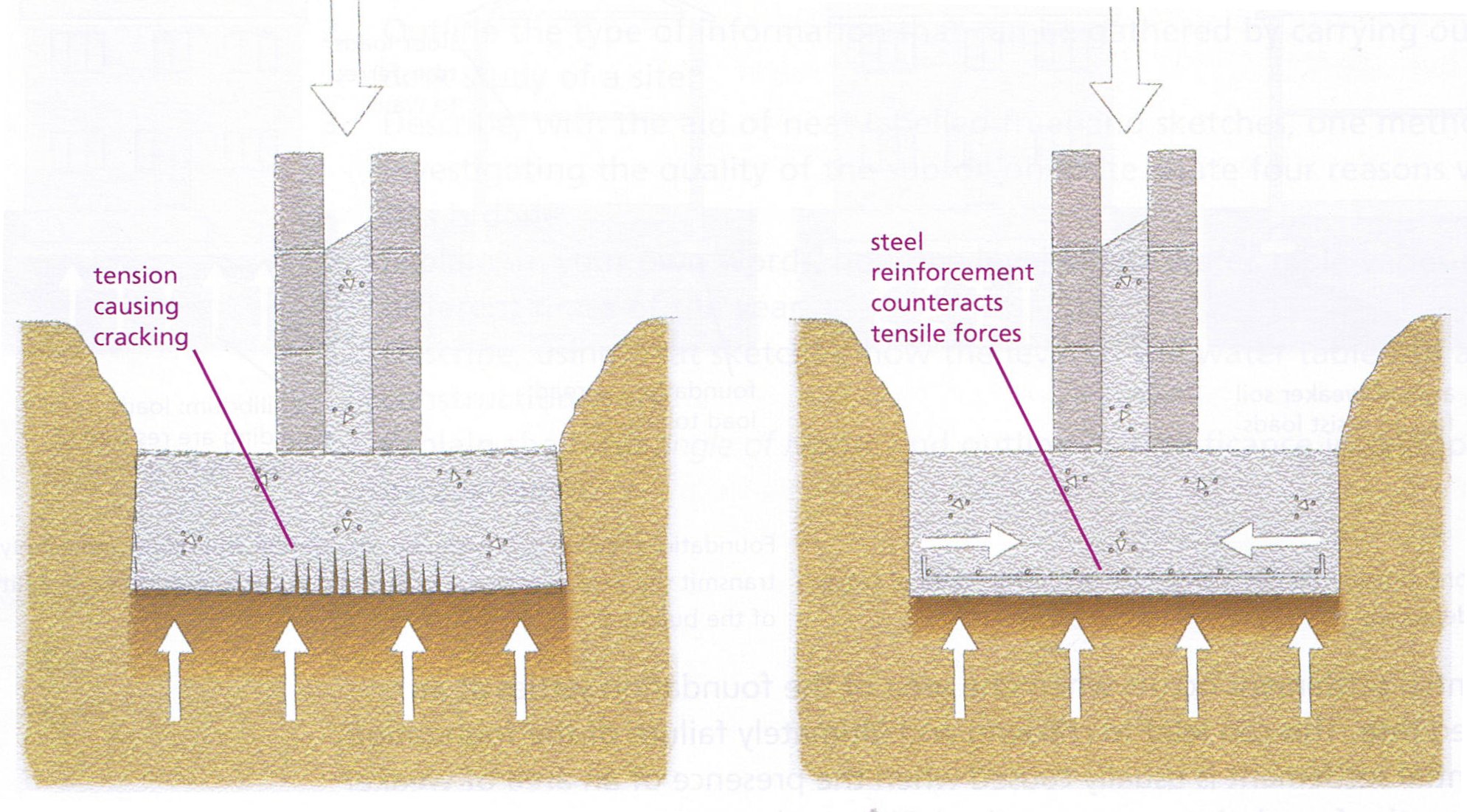 Consolidation: When stress is applied to a soil that causes the soil particles to pack together more tightly, therefore reducing its  volume. Process by which soils decrease in volume.

Gravel: small stones and pebbles (very  small, rounded stone), or a mixture of these with sand Bearing Capacity: is the capacity of soil to support the loads applied to the ground.

Hollow tile: A hollow building block of concrete or Terra cotta   used for making  exterior walls,   floors or roofs. Also known as hollow block Concrete: is a construction material composed of cement, sand, water  as well as other cement like materials.

Tiles: a thin slab or bent piece of baked clay, sometimes painted or glazed, used for various purposes, such as to form one of the units of a roof covering or floor (other shape )

Slates:  1. A piece of this rock cut for use as roofing. 2. A writing tablet made of a similar material. Plaster: a composition, such as one made of lime or gypsum and sand and water, applied in a pasty form to walls, ceilings, etc.

Settlement: is defined as downward movement of the soil, or any structure on it, as a result of soil consolidation, usually caused by the load applied by the structure.

Clay: a natural earthy material that is plastic when wet, consisting essentially of hydrated silicates of aluminum: used for making bricks, pottery, etc