Let’s Explore Electricity!. The movement of the electron

Electricity is the most widely used form of energy. Electricity  run our fridges, washing machines and in general, all electrical  appliances in the kitchen. Electricity will probably power all future cars’ motor.

In order to produce electricity you need another form of energy such as mechanical energy, solar energy, wind energy and so on.

But,  is important the electricity?. Just turn  the main switch off and try to enjoy yourself 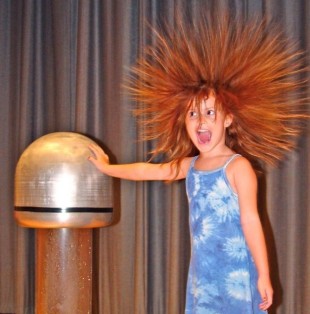 The day I met electricity.

When electrons build up on an object, the object becomes charged with static electricity until the electrons are able to jump to another object placed nearby.

Have a look at the atom structure. Can you see some electrons living the nucleus?  Why?

Electrons orbit in the space surrounding the nucleus. Electrons are attracted to the protons and repelled by other electrons. These forces of attraction and repulsion are much stronger than gravitational forces and are called electrostatic forces.

The electrons are said to be negatively charged and the protons positively charged. In conductive  materials, such as metals, the outermost electron in the atom is basically free, so it is very easy  for it to leave the atom and move around in the space between the atoms.

Conductors are made up of atoms whose electrons ( conduction band) are able to  escape from the atom’s influence. In a metal, some electrons are not stuck (fixed) to any particular atom and are free to wander in the metal. For instance, the copper, the most used conductor in the world, there is usually a free electron from every copper atom. As the electrons move, they collide with the atoms and thus meet resistance to their motion. The greater the number of collisions the greater the resistance.

On the other hand,  in Insulator materials, such as glass, the outermost electron in the atom is tightly bonded to the nucleus  by a electrostatic force. In this case, most electrons are attached to particular atoms. Almost none are free to wander through the material, and this prevent  the flow of electricity.

In a metal conductor, some electrons are free to wander from atom to atom. If the ends of a piece of metal are connected to a battery, the electrons are found to move through the metal. Thus:

Outermost : at the greatest distance from the centre