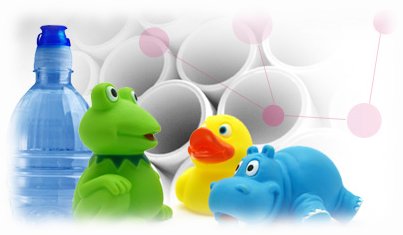 Most plastics are made from oil. Plastics are man-made materials. They are a useful invention because they are waterproof, easy to shape and tough. They have taken the place of traditional materials like wood and metal in many products. It is bad to waste plastic, as it is made from non-renewable resources and takes a very long time to decay.

A bit of Chemistry

Plastics are made of Polymers  which are obtained form monomers  ( low-molecular-weight )  by  polymerization reactions, in which large numbers of monomer molecules are linked together.

In the image on the left a monomer  ethene ( C2H4) is used to produce a Polimer ( poliethene).

Ethene or Ethylene –because it contains a carbon-carbon double bond, ethylene is called an unsaturated hydrocarbon.

The process by which we get a polymer is called polymerization. This process has three stages:  In the first stage, the monomer  is split into two identical parts, each with an unpaired electron ( or free electron ).  Now we have a free radical ( A molecule with an unpaired electron ). The free radical ( second line in the image ), forms a new bond with a ” neighbor atom ”   This process repeats over and over again to form large  chains containing thousands of carbon atoms.

There are two main types:

• They are relatively cheap.

• Most plastics are synthetics and are made from oil.

• Plastics are good insulators which makes them safe to use for casing electrical equipment and for the covering on wires.

• Most plastics can be made in different colours or can be clear.

• Plastics are non-corrosive and non-toxic

• They are not biodegradable and cannot be easily recycled.

Thermoplastics can be heated, moulded and shaped  various ways, lots of times. You have probably shaped them in the vacuum former or strip heater in your Technology Room.

Each time a thermoplastic is heated, it tries to return to the shape it first was, usually a flat sheet. This is called plastic memory.

Thermosetting plastics are generally strong and resistant to heat, but they melt the first time they are heated to a high enough temperature and harden (set) permanently when cooled. They can never be melted or reshaped again. They are used in situations where resistance to heat is important, e.g. on kitchen work surfaces, good-quality plastic cups, saucepan handles and plug casings.

USE OF PLASTICS APPROPRIATE TO THE PRODUCT

Expanded polystyrene (aeroboard) is used as white foam-like packaging to prevent damage to fragile goods in transit. As it is a good insulator, it is also used as a hot drinks container. It keeps the heat in the drink and away from your hands,

Acrylic, is ideal for signs outside shops, cassette boxes and aeroplane windows, but is too hard for plastic bottles. It does not look as good as glass and is not suitable for things that should not be scratched.

Polythene (or polyethylene, or PET) is ideal for use in plastic bottles.

Rubber is an insulator, which makes it safe for use with outdoor electrical appliances. Even if the rubber gets wet, it will not conduct electricity.

Thermoplastics are usually softer than thermosetting plastics and usually melt at lower temperatures, so are not as suitable for casings on electrical equipment.

Signs:  a notice,  warning, or advertisement, that is displayed  for public view. eg.  a traffic sign.