Using this processing it is possible to produce a wide range of different forms of plastic, such as tubes, sheets and films, structural parts, etc. 1º Step: Plastic pellets are placed in a feed hopper which feeds into the system. 2º Step. A turning screw pushes the plastic into the barrel where heaters increase the temperature and a melted polymer is obtained. 3º Step. The melted plastic is forced through a shaping die. Depending on the particular shape of this element, a continuous shape is formed and pulled out of the extrusion machine. 4º Steep. Solidification  by cooling

Plastics pellets flows, due to gravity, from the feed hopper onto a turning screw. It is converted into a melted plastic by the action of heaters situated along the barrel. The screw moves the molten plastic forward, forcing the plastic through a gate into the cooled mould. The mould is opened once the plastic has solidified and the piece is pushed from the mould by automatic ejector pins. After we get the manufactured piece, the mould is closed and clamped and the process begins again.

This is a similar process to extrusion. In compression moulding, plastics pellets, sometimes called moulding powder, are placed in the feed hopper and pushed to the gate by the action of the turning screw. It is heated and compressed while it passes through the barrel. After the gate, the molten charge is quickly transferred to a press where it is moulded while still hot. The part is removed after sufficient cooling.

Plastic grocery bags, bottles and similar items are made using this processing.As in compression processing, plastic pellets are melted and the plastic is forced through a gate into the blow pin camera. The plastic substance is expanded and cooled by being made to flow around a massive air bubble. After a few seconds, the mould is opened and the manufactured product is ready. 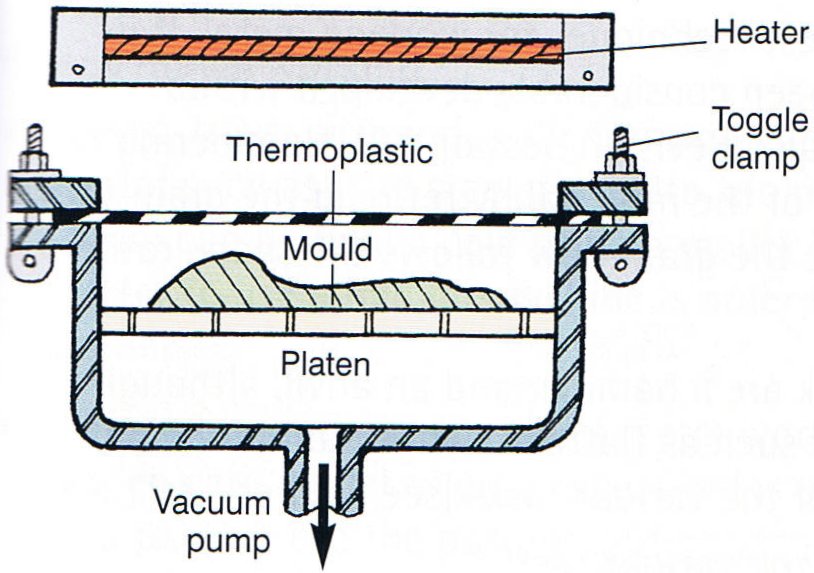 Vacuum forming is a popular deforming process. Vacuum forming works by removing air, thereby creating a partial vacuum underneath a soft and flexible thermoplastic sheet and allowing atmospheric pressure to push the plastic down onto a mould. Figure 5 shows a typical mould. The vacuum forming process may start with a ‘blow’ that stretches the plastic or it may be started by raising the mould, on the plate, to create a draping form. On some machines a combination of these processes is used. The aim is always to create a high definition outcome without any excessive thinning having taken place.