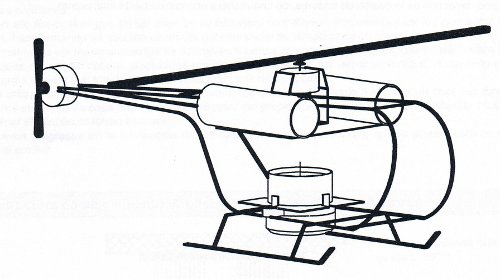 Note: Once finished, models shouldn’t be used as toys in the commercial sense of the word. They are an educational tool, suitable for the classroom

Does the idea of checking if a propeller is turning after filling two recipients with water at different temperatures see strange to you?

This is the Seebeck cell. Another thermoelectric element is the Peltier cell which is the direct opposite: When you supply a Peltier cell with an electric current it acts like a heat bomb, producing cold on one side and heat on the other. Both cells can be used, with less efficiency, to create the opposite effect. If you send a current of 8V and 3 A through the cell in this kit, one face will heat up to 60º and the other will cool down to 50º. Here we’re not going to use the Peltier cell to obtain heat and cold, but for the opposite effect. One side will be cooled down and the other will be heated up to obtain a voltage of 1-3 volts and a current of 10 to 500 mA. Electricity is generated in a silent and ecological way through the difference in temperature. So why isn’t it used more?

There are two basic reasons:

1. The output of the current thermoelectric cells is such that hardly more than 5% of the temperature differential is used to generate electricity. 2. Thermoelectric cells are still very expensive.When their output is raised and their cost lowered it will be possible to use residual temperature differentials, such as that produced by the burning of rubbish, in a very interesting way.

In 1821 Thomas Johan Seebeck had the idea of making a circuit with two different materials, passing through two welded seams. While cooling one and heating the other he proved that a current was flowing through the closed circuit he had constructed. On the other hand, when the temperature of both metals was the same no current was produced. This thermoelectric effect was henceforth known as the Seebeck effect and is the basis of all modern day thermal elements using different materials. Nowadays, instead of two soldered metals we use semi-conductor materials.

Let’s see fist what is a N and P semiconductor

N semiconductor. Phosphorus or Arsenic have 5 electrons in its outer band. Is small quantities are added to Silicon, then four of the five electrons will bind ( linked ) with the Silicon atoms leaving one electron unbound and free to move, so we can find negative charge moving along this material

P Semiconductor. In case of adding elements such as Boron or Indium (three valence electrons )  in its outer band, unfilled spaces known as “holes” will appear as no all electrons can bind with silicon atoms, so we can find positive charge moving along this material. 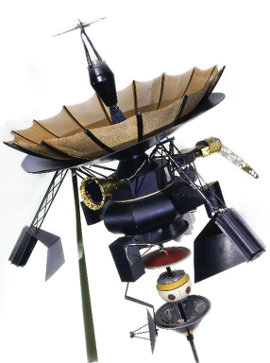 As both materials are neutral, if N material has a negative charge below the heat surface, there is a positive charge above the cold surface. The same occur in the P material.

Structure of a Seebeck cell with various elements  Thermal parallelism and electricity in series.

As we have seen before, a positive area and a negative area is produce in every semiconductor as a consequence or heat. Sea next image and if you add some semiconductor we obtain a “serial battery”.

First situation: without a difference in the level between the 2 recipients

The water circulates. Difference in level. The generator produces currents You can’t rightly talk about a current here as with electricity but the process is visible immediately. There’s a slope, the water circulates and produces current. If you transfer this principal to a ‘fall’ differential in temperature, you can easily understand the basis of how thermic generators operate.

How does the thermic helicopter work?

If the previous explanations have been assimilated correctly, it shouldn’t be difficult to understand how the thermic helicopter works. The thermoelectric Peltier cell will be explained first. The cell will heat up to about 110ºC with the flam of a candle. The other face will stay colder, at about 70ºC, due to a radiator. The temperature differential will create a voltage of between 1.4 and 2 volts and 100mA, enough to move the helicopter’s two motors. The cell produces energy as long as a temperature differential is maintained, but the duration of activity of the model is limited owing to some technical restrictions. When the radiator of aluminium tubes has heated up the temperature will lessen, the motors will turn more slowly and the siren will go silent. At this point, after about 10 minutes of use, it will be the right moment to blow out the candle so that the radiator cools down. You shouldn’t forget that the Peltier cell can only support temperatures of up to 140ºC, after this point the interior weldings melt. There are cells that can support higher temperatures but their price is prohibitive for teaching purposes. You can lengthen the duration of use by placing damp cotton in the aluminium tubes. Water absorbs a lot of heat and can lengthen the duration of use by some 5 minutes, but in the end it is vital to have a pause in the use of the helicopter. Under no circumstances should you use a heat source other than a candle, for instance a lighter, as this will destroy the cell.

Signs:  a notice,  warning, or advertisement, that is displayed  for public view. eg.  a traffic sign.