As technology grows, so does our need for things to go faster. Ten years ago, websites just included images, coloured text and some repetitive melodies. Now Flash websites, animations, high resolution photos, online gaming, videos or streaming ( radio on the internet ), are getting more popular for people who demand faster and faster internet connections.
The connection speeds listed below represent an average speed at the time of publication ( May 2009 ). This will no doubt change over time.

1) PCI modem( see image above ). Analogue up to 56000 bits per second. It means that in a second, 56000 bits ( 0 or 1 ) travel through the copper wire. It is both economical and slow and it is also called dial-up access. If you connect the modem, you get internet but as it uses the analogue telephone line, if you surf on the internet, nobody can call you because the line is busy.
Using a modem connected to your PC which is very cheap ( about 10 €) , users connect to the Internet only if you click on the telephone Access Icon and the computer dials the phone number provided by your ISP ( Internet Service Provider ) and connects to the network. The signal is analogue because data is sent over an analogue telephone network. This modem converts received analogue data to digital ( always analogue on the telephone site and digital on the computer side ).
As dial-up access uses ordinary telephone lines the data rates are limited and the quality of the connection is not always good. Nowadays very few people use this type of connection.
2) DSLDSL or – an ‘always on’ connection- uses the existing 2-wire copper telephone line connected to the internet and won’t tie up  your phone like the old modem does. There is no need to dial-in to your ISP as DSL is always on. DSL is called ADSL ( Short for Asymmetric Digital Subscriber Line) for home subscribers.
As we said before ADSL is short for asymmetric digital subscriber line and supports data rates up to 10Mbits ( May 2009 ) when receiving data ( download ) and from 16 to 640 Kbps when sending data ( upload ). ADSL is called asymmetric because it supports different data rates for upload than for download traffic.

3) CableThere are two type of cable; Coaxial and optic fibre. The first one is used by cable TV and that is common for data communications ( see image on the left ).
The cross-section of the cable shows a single centre solid wire made of copper surrounded by a copper mesh conductor. Between the main wire ( in the centre ) and the mesh conductor is an insulating dialectric. This dialectric ( blue part in the image ) has a large effect on the essential features of the cable. Depending on the material that isulator is made of, the cable has different inductance and capacitance values and these values affect how quickly data travels through the wire. The last layer is an outside insulator to protect the whole wire.
Data is transmitted through the rigid wire, while the outer copper mesh layer serves as a line to ground. 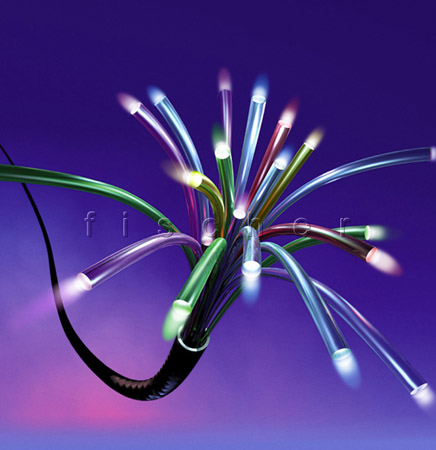 Fibre-optic cables are strands of a special optical material as thin as a human hair that carry data ( files, videos .. ) over long distances. Now, there is not electrical signal. In Optical fibres data are carried as light signals

How Does an Optical Fiber Transmit Light?

Wireless broadband (Wireless Internet Connections ). Instead of using cable networks for your Internet connection, WIC uses radio frequency .Wireless Internet can be accessed from anywhere as long as your WIFI adaptor is located  within a network coverage area. It also provides an always-on connection and  it is still considered to be relatively new.

IoS short for  Internet over Satellite allows a user to access the Internet via a geostationary  satellite that orbits the earth. A geostationary satellite is a type of satellite placed at a fixed position above the earth’s surface. Because of the large distances between home and satellite,  signals must travel from the earth up to the satellite and back again. It causes  a slight delay between the request and the answer.

Tie up . A temporary stoppage or slowing of business, traffic, telephone service, etc., due to such incidents as a strike, storm, or accident

Strand: A single filament, such as a fiber or thread, of a woven or braided material