The different parts of a structure are either in compression or in tension, or both.

A steel cable one centimetre in diameter can support up to 9,000 kg or what is nearly the same, the weight of two  Indian elephants!.

In construction, stone is not a good choice for a tension structure but it is, however, strong under compression. Egyptian pyramids were made of enormous stone blocks, weighing over 1000 kg. The blocks on the bottom support the weight of the upper blocks. Generally speaking, force changes or tries to change the shape or movement of a body. A force can cause a body to accelerate. The actual acceleration of the body depends on the sum of all forces acting on it. Every force acts in a particular direction, but most of the forces can be reduced to a combination of compression and tension.

Forces are measured in newtons.

First of all, a physics concept:

It is a measure of the mass of the substance in a standard unit of volume. The  way to find out  the density of a substance is to measure its mass and its volume, then divide the mass by the volume Density = Mass ÷ Volume

A pushing force that tries to shorten a structural element. How can you  feel compression?. Just,  put your hands together and push hard.

A pulling forces that tries to make a structural element longer. How can you feel Tension?. Link your hands 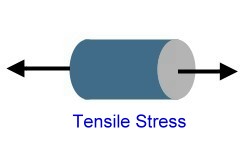 Have a look at next figure and answer:

2º  Which type of force appears in: a) a scissors b) a tree trunk c) a drill bit d) a door handle e) a well rope 3º Let’s learn a bit more about forces. We will visit the BBC web page about Pushing and Pulling forces.

Now, a forces  video to play with.

Sliding: to move along in continuous contact with a smooth surface drill bit: These are cutting tools used to create cylindrical holes. Bits are held in a tool called a drill, which rotates them and provides axial force to create the hole Door handle A doorhandle is the device mounted on the exterior and interior of automobile doors for the purpose of opening them