The electric power in watts represents the rate at which energy is converted from  electrical energy to some other form of energy, e.g., mechanical energy, heat,  light, etc. The simple formula for the power ( in a resistor ) in a direct current (D C) circuit  is given by the product of the voltage between its terminals and the electric current that passes through it.

In the international  system P is measured in Watts, V in volts and I in Amps.

The water analogy still applies. Think of voltage as pressure and  the Amps as outflow of a river

The running water falls  into  the buckets attached to the wheel and forces the wheel to turn, producing energy. You can increase the power generated by:

1º  Increasing  the pressure of the water that falls into the buckets;  the wheel will turn faster, generating more power.

2º Increasing the flow rate and the extra water hitting the buckets will make  the waterwheel turn faster, producing more energy.

” We increase the current because the  water flow  has been increased ” 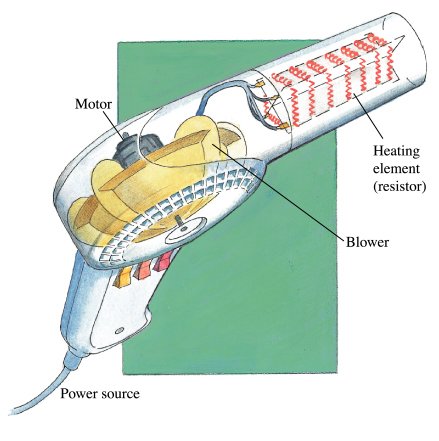 A very good example of a home appliance with a high wattage is a hair dryer.

It needs only two parts to generate the hot air that dries your hair:

Hair dryers use the heating element ( a simple wire with some resistance ) to transform electric energy into heat.

How does it work?. The whole mechanism is really  very simple: 1. When you plug in the hair dryer, current flows through the hair dryer  and “feeds” either the motor or the heater. 2. The heating element gives out heat

First of all, watch this video about electric power 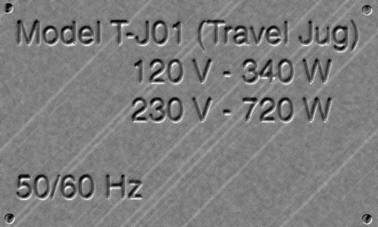 A kettle. Jim has to travel abroad as part of his job. Knowing that not all hotels in the USA provide a ‘Welcome Tray’  ( coffee , tea and sugar ) he buys a  kettle so he can make tea for himself as often as he wants. There is  a label stuck to the kettle  ( see figure on the left ). On the paper  is written:

1. Why would boiling some water in the Travel kettle in San Francisco (power supply: 120 V) take longer than in London (230 V).

2. Calculate the current through the heater in each city.

3 When Jim leaves San Francisco, Jim forgets to switch over the voltage setting to 230 V. Do you think it is a problem? Do you think the kettle could be damaged by leaving it at 120 V ?

4.A Fuse is a component  used to protect the appliance from current overload. Calculate a suitable value to install in the plug to protect the travel kettle from overheating.   Answers

But it cost money to produce energy  and we have to pay for it.

The joule is a very small unit of energy to use when dealing with domestic electricity. A unit of energy called the kilowatt per hour (kW h) is used instead.

The kwh is the energy unit used in the home to measure the use of energy. The more energy you use, the more money you have to pay to your local electrical company

2º  A 2000 W appliance operates for 3 hours. How many kilowatts per hour of energy does it use?

Electricity always take the shortest path (way) to the ground.

Outflow : of a river is the volume of water transported by it in a certain amount of time.

Gutter: a narrow channel which drive the water.

Spout : a pipe or a conductor through which a liquid is conveyed in a stream