What is Electrical Resistance?

When electrons flow through a bulb or another  conductor, the conductor does offers some obstruction to the current. This obstruction is called  electrical resistance.

Every material has an electrical resistance and it is the reason that the conductor give out heat when the current passes through it.

Resistance is a measure of how much an object opposes the passage of electrons. The unit of electrical resistance is the ohm and it is represented by Ω

Every material has Resistance. Copper has a low resistance and wood has a high resistance. For example, a metre of

We need resistance to reduce the flow of electrons through a circuit, so we can build resistors to behave as Electrical resistance. On the right, a resistor used in the electronic industry. 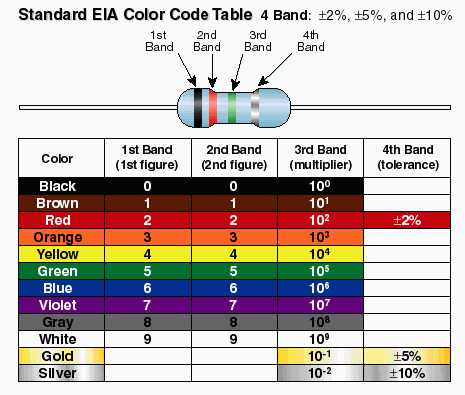 Sometimes you need a particular kind of resistor, but you don’t have it on hand or it doesn’t exist. Fortunately, it’s possible to use several different resistors in combination to get virtually any level of resistance, for example, if you have 2 resistors of 20 Ohm and you need a resistor of 40 Ohm, just add them both together in series, so Rt = R1 + R2 + ……… ( Serial ). 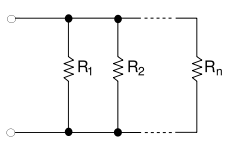 Let’s make a traffic analogy and talk of electrons as cars. This is a picture of three possible toll booth situations on a motorway.
1º In the first case, we have a one-way path. First, the conductor, low resistance and fluid traffic. Later, a resistor in series with the wire, so a bottleneck area through which it is somewhat difficult for the electrons to move. Later, the conductor again with the electrons moving better.
2º In the second case, we add two resistors in series, so the total resistance will be increased, consequently less electrons will flow in the conductor
3º Quite obviously, adding resistors in parallel would have the overall affect of ” building a three-lane motorway”, decreasing the total resistance and increasing the overall car flow rate (electron flow) along the wire. In the case of adding more resistors in parallel, less overall resistance is created.

In a battery, chemical energy is converted into electrical energy. The electrical charges get electric potential and kinetic energy as they pass through the battery.

The average kinetic energy of the moving charges remains the same. The lost potential energy is converted into heat as the charges move around the circuit.

1ºElectricity is the movement of electrons through a material. Electron flows along like a water current in a stream, so we call it Electric current. Current ( I) is the number of electrons which flow through a wire per second. Current is measured in Amp

You need something to give energy to electrons. You need a battery and the power of it is called voltage. The higher the voltage, the more power there is to drive the electrons thought the circuit.  Voltage (V): The “pressure or Energy” forcing the electrons flow around the circuits. The battery supplies the “pressure.” Resistence (R) is the  amount of force opposing the current, for example, from a bulb. Resistence is measured in Ohms (Ω)

I = v/r A nine volt battery supplies power to a bulb with a resistance of 18 ohms. How much current is flowing through the bulb? Solution: Substitute in the values for V(Voltage) and R(Resistance).

1º A 110 volt wall outlet supplies power to a TV set with a resistance of 2200 ohms. How much current is flowing through the TV?

2º A CD player with a resistance of 40 ohms has a current of 0.1 amps flowing through it. Calculate how many volts supply the CD player.

3º In this circuit, calculate:

a) the total resistance in the circuit

b) the total current flowing at point A

4º In this  circuit the resistors are in parallel:

A) the total resistance in the circuit

bottleneck: 1. A narrow or obstructed section, like on  a highway or in a pipeline. 2. A point or an area of traffic congestion. 3. The narrow part of a bottle near the top.